Marco Chacón, PhD, and his wife, Debbie Chacón, had had enough. After a constant barrage of media coverage showing immigrants being subjected to a double standard of justice, including the “monstrous practice” of family separations at the Southern border, they knew they had to do something.

“History teaches us that there are certain things we cannot turn a blind eye to,” Marco Chacón says. “If you remain silent, you end up being complicit, and to the degree that we can change that, we must act.”

Impressed by the professionalism of the student attorneys who are guided by seasoned faculty, the couple donated $5 million to establish the Chacón Center for Immigrant Justice as a way to continue and expand the work of the clinic.

“We realized that these people are passionate about the work they do and optimistic in their ideals. What’s better than to join forces with people that have such passionate hearts?” he says.

Chacón, a biotech entrepreneur whose gene therapy manufacturing company Paragon BioServices served as an anchor for the University of Maryland BioPark before Paragon was acquired by Catalent Pharma for $1.2 billion in 2019, has a personal interest in the immigrant community. “I’m your quintessential immigrant from Central America,” says Chacón, who was born and raised in Costa Rica.

He was an impressionable exchange student with a spirit of adventure when he was placed with a family in a small town in Ohio in 1968. “I just fell in love with the people, their traditions, their idealism,” he recalls.

He also fell in love with a young Ohio woman named Debbie James, whom he eventually married and with whom he started Paragon BioServices in 1990.

The passion for justice that the Chacóns observed at the law school is evident in the work of Maureen Sweeney, JD, faculty director of the Chacón Center, and the center’s associate director, Gabriela Kahrl ’08, JD, whose steadfast guidance of student attorneys has made the clinic a center of immigrant advocacy in the state of Maryland.

During the 2020-2021 academic year, Sweeney and Kahrl supervised 17 students, who, despite COVID-19 restrictions, have won three asylum cases, conducted two other trials, and guided one client to becoming a naturalized U.S. citizen.

“When you represent somebody with regard to their immigration status, you’re really putting them in a position to be able to support themselves, to be able to take care of their family, to have a sense of security in the world,” Sweeney says.

“This work is sacred to us,” echoes Karhl. “The Chacón Center will be a place where we value, honor, and serve people who have come to the United States to find a safe haven and a future for their families.”

In addition to providing a scholarship that will allow the law school to attract the best and brightest students interested in immigration law, the Chacóns’ investment will allow Sweeney and Kahrl to focus on thinking strategically about what’s best for Maryland’s immigrant community.

Part of that strategy includes increasing the level of advocacy at the local and state level and implementing a citizenship initiative to promote naturalization. As of 2019, Maryland was home to approximately 160,000 permanent residents eligible to become citizens. Many put off naturalization due to financial barriers, lack of information, and lack of access to legal representation. The Chacón Center’s citizenship initiative will strengthen Maryland’s immigrant community by providing legal security and a much-needed voice at the ballot box.

The Chacón Center will continue the clinic’s important asylum and deportation defense work while increasing the number of students the clinic can train. According to Sweeney, deportation proceedings are often triggered by minor offenses and people facing deportation are not guaranteed an attorney. The need for lawyers far outweighs the availability of affordable representation.

“We will continue to take on the hard cases,” Kahrl says. “Hard because they are rife with injustice and trauma and also because we choose to represent clients with criminal histories because we understand a person is more than the worst thing they’ve ever done.”

“The Chacóns really believe in our vision for immigrant justice, which is that we don’t all have to be perfect human beings to be part of the community,” says Sweeney, noting the unequal distribution of justice for people of color who also are often immigrants.

New to Maryland Carey Law’s immigration offerings will be a Federal Appellate Clinic planned to be operational in fall 2022. The clinic will advance the law in Maryland and nationally while providing students with an in-depth experience of legal writing, oral argument, and representation in two appellate cases per year in the Fourth Circuit Court of Appeals.

“It’s exciting for our students to get this kind of opportunity,” says Sweeney, adding that Maryland Carey Law is one of just a few law schools in the country offering an appellate clinic. “It’s unusual for them to be able to have the opportunity to work at the federal appellate level, but they’ll be right in there writing briefs, making novel arguments to the court, and in some cases should be able to actually argue the cases at the court in Richmond, Va.”

Dolores, an Immigration Clinic client who asked that her name be changed to protect her identity, is a permanent resident and veteran of the U.S. military who emigrated from the Caribbean as a child. A sexual assault during her military service led to trauma, depression, and an arrest on charges of drug use. Her conviction, combined with 14 years of bad legal advice, resulted in two denials of her naturalization application.

Dolores came to the clinic after her second naturalization application was denied. For the past seven years, Maryland Carey Law student attorneys have worked to vacate her conviction by filing motions to reopen her criminal case and petitions to expose the unconstitutionality of her plea, as well as engaging in law reform work in the General Assembly to change laws that would affect her case. Thanks to the steady work of student attorneys, Dolores has a pending application for citizenship.

“This is a wonderful country,” Dolores says. “In spite of the circumstances, you see everybody’s trying to get here. They’re not trying just for nothing. This is a place where you can come and thrive.”

She is grateful for the consistent legal help that’s been provided by Maryland Carey Law students and is hopeful about her naturalization application. “Whichever way it goes, I’m content knowing I can say with a clear conscience that I received due diligence. They did right by me. They tried.”

Kiria Abreu-Jimenez, a third-year law student and Dolores’ student attorney, credits Kahrl, her faculty supervisor, with giving her the confidence and knowledge to press on despite facing a wall of legal challenges.

“When you see something is unfair, you have to be willing to give it all you have to make it right, even if it seems impossible,” she says.

Sweeney says she enjoys watching students turn into lawyers through their clinic work as they develop relationships with their clients, prepare legal documents, and represent their clients in court. “It’s a transformative experience, and that’s why I think immigration law is such a great area of law for students to work in. It helps them think of themselves as lawyers who can change somebody’s life and on a bigger scale can change the law to make it more just.”

On a more personal level, working with clients helps students to see a common humanity. “They’re people just like us,” Sweeney says. “They’re here because they have families to take care of, because they want educational opportunities, and because they want a safe place to live. Despite a few surface legal differences, we’re all human beings on this same earth we share.”

Once she gets her citizenship, Dolores plans to go to law school to help immigrants like herself. The Immigration Clinic and now the Chacón Center are a lifeline to hope that have kept her afloat during a long and difficult journey. She has a heartfelt message for the Chacóns: “Thank you; it’s not all in vain,” she says. “A lot of people will benefit from what you have done.” 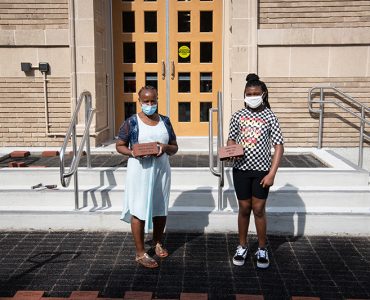 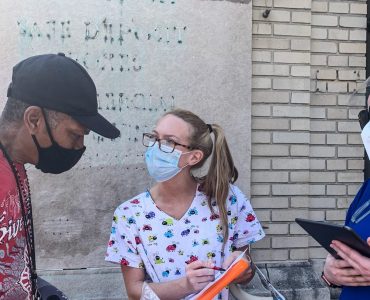