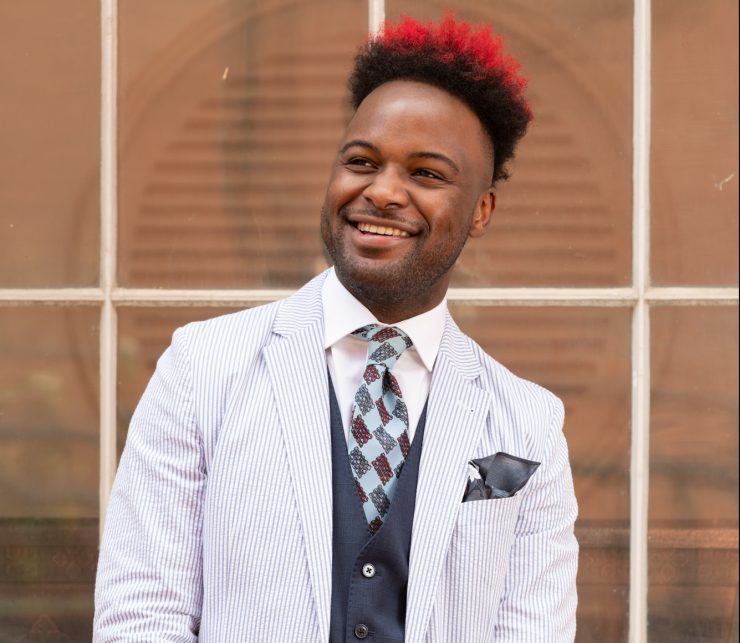 University of Maryland Francis King Carey School of Law student Randall Ainsworth, Class of 2023, stands out in a room. The cherry red streak running through his hair sets him apart, and that’s by design.

He looks like a rock star, and while playing the electric guitar is an important part of his life, the red streak is not an homage to his idol Jimi Hendrix or the blues legends he reveres.

He dyed his hair in high school at his mother’s suggestion and quickly realized it was a trademark, a way to differentiate himself in his rough Northwest Baltimore neighborhood.

“There’s a possibility you could be misidentified, not only by police, but by other people in the community, and my hair was a way to protect myself and potentially keep myself alive,” he says.

Ainsworth’s ability to transform challenges into springboards to success puts him firmly in the footsteps of U.S. Rep. Elijah E. Cummings, a civil rights icon who prevailed in the face of adversity.

Established in 2019, the scholarship pays tribute to the late congressman, his many contributions to society, and his standing as one of Maryland Carey Law’s most distinguished alumni. Spearheaded by the Board of Visitors and former chair Robert J. Kim, JD ’83, the scholarship supports Maryland Carey Law students who have an interest in public service and a record of academic excellence.

“The Cummings Scholarship honors Elijah by continuing his legacy of empowering students to become legal leaders, using their education to do good in the world,” Kim says.

“I’m honored,” Ainsworth says. “Congressman Cummings has an amazing legacy, not only in Maryland, but across the country. He’s done a lot to open doors for people, especially people like me, and to be able to walk in his footsteps and to have an opportunity to open doors for other people is amazing.”

Ainsworth, 23, who is a Maryland Carey Law Dean’s Scholar as well as a Diversity and Inclusion Scholar, seems to be well on the way to being able to answer some of the tough questions.

When reflecting on a two-year struggle with homelessness during high school that forced him to shower at the gym and linger long hours in the library, he says, “All of those things, while they were difficult in the moment, developed character, taught me life skills, and taught me to be humble.”

Ainsworth was 13 and walking home from middle school when he saw a group of kids set a pile of leaves on fire and run. He approached a police officer because “they’re here to serve and protect,” he remembers thinking, but was accused of setting the blaze and told he was a liar with no future. The experience, says Ainsworth, “lit a fire in me. I realized the law treats people differently based on the color of their skin, and I wanted a way to hold people accountable. That inspired me to go to law school.”

Ainsworth says the highlight of his first year at Maryland Carey Law has been his participation in the Black Law Students Association Mock Trial Team, which recently placed fourth in the Constance Baker Motley Trial Competition. Despite strong criticism from one of the judges — “She was not a fan,” he recalls. “She said my advocacy skills were horrible” — he was named Best Advocate in the Country. “Not bad for a first year,” Ainsworth says. “It’s an indication that regardless of who’s put in your path, you just have to persevere, trust God, and be yourself in spite of adversity.”

He credits his mentor, Judge Wanda Keyes Heard, JD ’82, the first woman and the first Black woman to preside over the Baltimore City Circuit Court, for guiding him through the nuances of being an effective attorney. As fatigue began creeping in during the mock trial competition, Ainsworth’s three years of training with Judge Heard took over. “Always have deference for the judge. Know the law. Read the room. Her mentorship has been so valuable,” he says.

Now retired, Heard says she knew Ainsworth was special when she passed him her business card as they crossed paths on stage at an awards banquet in 2016. He impressed her immediately when his legal conclusions and summary orders as an undergraduate were superior to those of a third-year law student who also worked in her office.

“I’m watching the parade,” Judge Heard says proudly. “Randall’s going after his dreams, and I’m honored to stand on the sidelines and wave because he’s really going to do phenomenal things.”

One of those phenomenal things will be to continue to advocate for those following in his footsteps. A recent American Bar Association study revealed that 86 percent of attorneys in the United States are white and just 5 percent are Black. Ainsworth aims to change that and bring others along with him.

“A lot of times you’re going to be the only Black male in the room,” he says. “My goal is to embrace being that one and do what I do so well that they open the door for everyone behind me.” 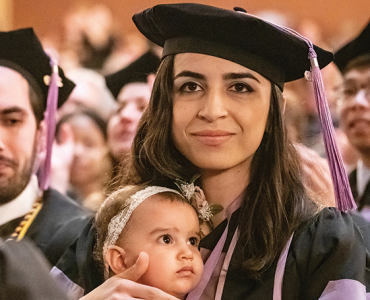 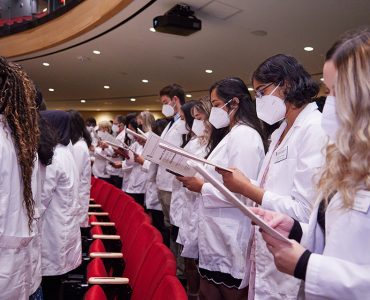 In Person at Last: Students Happy to Return to the Classroom After Months of Virtual Learning