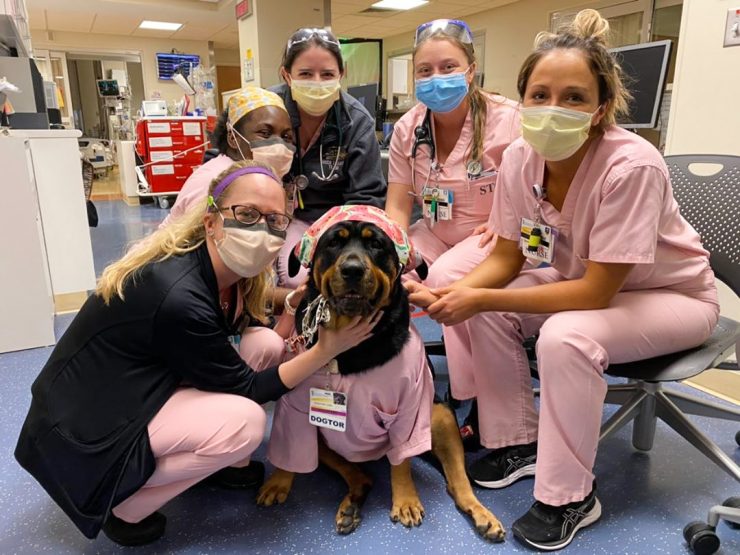 When the COVID-19 pandemic put a halt last spring to Caroline Benzel’s hospital visits with her therapy dog Loki, the University of Maryland School of Medicine student unleashed her energy and compassion into helping front-line workers in a different way.

Benzel and her 3-year-old Rottweiler, affectionately nicknamed “Dogtor” Loki, took to FaceTime and Skype to continue virtual therapy sessions with health care workers at the University of Maryland Medical Center (UMMC), some of whom were working with patients fighting the coronavirus.

Benzel noticed during the sessions the “wear and tear” that personal protection equipment was causing, such as facial bruising. So she started Dogtor Loki’s Hero Healing Kits, distributing much-needed supplies such as lotion, powder, Vaseline, lip balm, instant coffee, and tea to front-line workers.

“We try to include items that we think are not only helpful and functional but also could be easily kept on a person when they are working,” she said.

She said that as of early this year, she had distributed more than 7,000 kits to Maryland hospitals, police departments (including the UMB Police Department), and fire stations, and that her work has inspired others in eight states. The efforts by people across the nation have raised more than $100,000.

Loki is the face of the campaign and has become a bit of a “cult hero” with her own Instagram and Facebook accounts and about 20,000 combined followers (dogtor.loki). The kits include a photo of Loki in her doctor’s coat and feature a heartfelt thank you to the front-line workers: “Your job isn’t always easy, but just know you are incredible and caring and compassionate and selfless. Thank you for being our hero.”

For her contributions, Loki has received several high-profile national awards including the American Kennel Club Paw of Courage award, which honors dogs who serve their communities, and the American Rottweiler Club Heroism Award. She also was honored by the Animal Medical Center in New York at its virtual Top Dog Gala in 2020; the previous year’s honoree was late President George H.W. Bush’s service dog.

“It was pretty incredible to see that we were getting recognition for what we were doing,” Benzel said.

Benzel and Loki also have been featured in national publications such as People and National Geographic as well as TV shows including Good Morning America and The Doctors.

Benzel’s efforts got a boost last spring when she appeared on Katie Couric’s “The Bright Side” video series, where Couric surprised her with a $10,000 donation from Ally bank. Half went to UMMC to help buy personal protection equipment and food for front-line workers, and the other half to distributing more Hero Healing Kits.

Benzel said hospital staff who have received kits have told her “not only were the items so functional and helpful, they also said that it was meaningful to them that somebody took the time to put together a care package.”

Stacy Foertsch, BSN, RN, cardiac surgery ICU manager at UMMC whose unit participates in therapy visits with Loki, agreed. “Everyone was grateful and loved that it came from Caroline and Loki,” she said of the kits, which were distributed to her team.

Loki and Benzel resumed patient and staff visits at the hospital in late summer, though some upticks in COVID-19 cases around the state over the winter forced them to briefly pause the in-person dog therapy.

“I was pretty elated to return, to say the least,” said Benzel, a third-year student who also went back to the hospital for her rotation in the fall. “I feel like it’s especially important for people who are in the hospital and are feeling pretty disheartened during this pandemic. And I feel like it’s a nice game-changer given all the circumstances.”

Benzel adopted Loki the same week she was accepted into medical school in fall 2017. She had lost her dog to cancer a few months earlier, and she knew she wanted her next to be a therapy dog. Benzel, who had volunteered for about a decade with rescue dog organizations, had been inspired to undertake the work when her grandfather was hospitalized for more than a month during the holidays.

“He was struggling emotionally and mentally. He was so unhappy being there,” she said.

“When the therapy dogs would come in, that would literally turn around his whole day, let alone maybe his whole week. I just remember after doing that, I told myself the next dog I got, no matter where I got it from, I was going to make it a therapy dog.”

Loki seemed like a natural for the work even as a puppy, Benzel said.

“I had the sense right out of the gate she was going to make a good therapy dog,” Benzel said. “Within the first hour or so, with the way I could handle her, I was like, she’s going to make a great working dog. She’s very smart, and she’s very manageable. If you picked her up and she didn’t want to be in your arms, she wouldn’t fight you. She was very patient, even at a young age.”

Benzel said she and Loki, who sports scrubs and a white doctor’s coat that the UMMC staff had custom-made for her, spend a lot of time with long-term patients.

“I have a tendency to focus on the more downtrodden patients, the patients who are in a really bad way, the patients who don’t have family members visiting them as regularly as they would hope,” Benzel said. “Hanging out with a dog and having a conversation with a friendly person can be a turnaround for them.”

Foertsch said that Loki greets patients “with lots of love.”

“Loki has been known to climb in bed next to an acutely ill patient upon Caroline’s commands, and the patient immediately lights up,” she said. “Patients share stories of their dogs or childhood memories of a pet, and for a short period of time they can forget about their pain and medical condition. These visits bring comfort and normalcy to our sick cardiac population.”

Benzel described Loki as “a very empathetic dog, and she seems to read situations really well. Loki will make direct eye contact with patients, and it comforts them.”

“There’s something that normalizes a hospital room for the patients — the sensation of feeling a dog’s fur, looking into an animal’s eyes — it’s just such a sense of comfort and a de-stressor for them. It truly is a whole other way to make them feel at home even though they aren’t.”

Loki has made a full recovery after facing her own health issues — ACL and eye surgeries. Benzel said her dog had an uneventful recovery and is back to her usual “slow and steady” self.

“She was never built for speed. She was always built for comfort,” she said.

In addition to monetary and item donations for kits, Benzel has received items such as dog and cat treats.

“I had thousands of dollars of dog treats and cat treats that I was handing out at the hospital on New Year’s Eve and New Year’s Day with Loki, and we were going around with the ‘cheer cart,’ giving them to people for their four-legged friends,” said Benzel, who plans to distribute another 1,000 healing kits in Maryland this year.

And as eventful as 2020 was for Benzel, it came to a close with another memorable moment: Before handing out the treats on New Year’s Eve, she got her first dose of the COVID-19 vaccine — with Loki by her side.

If you would like to donate to Dogtor Loki’s Hero Healing Kits, you can purchase items through the Amazon wish list or direct message Benzel on Instagram or Facebook for her Venmo to send cash. Benzel said she particularly needs items such as Gold Bond powder and Chapstick that Amazon puts purchasing limits on. 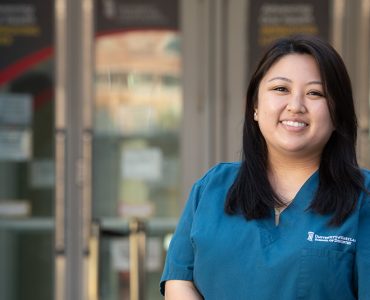 Reflecting on Graduating into a COVID-19 World 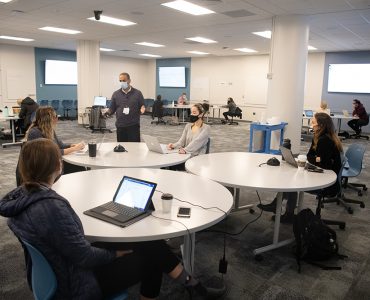 Back to Campus: Students Face Challenges, Uncertainty Head-On in Return to In-Person Learning