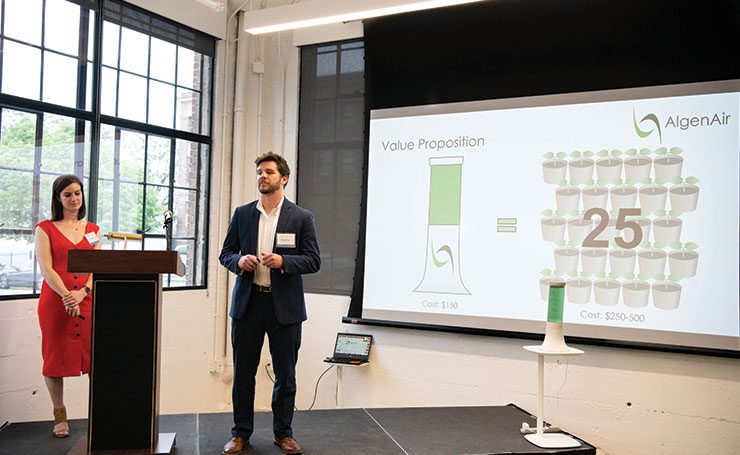 Speaking over the steady chirp of a hand-held carbon dioxide monitor, Dan Fucich, a PhD candidate in the Marine Estuarine Environmental Sciences program at the Institute of Marine and Environmental Technology (IMET), encouraged attendees of Grid Pitch ’19 to take a deep breath.

As they exhaled, Fucich shared the results of the monitor — 1,500 parts per million. “The air you just put into your lungs contains carbon dioxide levels that are three times what is occurring outside,” he warned. At levels above 1,000 parts per million, “you start to feel drowsy. You might not be able to think clearly,” he said, ticking off a list of the negative effects of high CO2 levels, including headaches and respiratory problems.

Fucich and his partner, Kelsey Abernathy, also a PhD candidate at IMET, are co-founders of AlgenAir, an e-commerce company that has developed a natural air purifier called the Aerium, which uses algae to combat indoor air pollution. The entrepreneurial students pitched their idea and displayed a working prototype on May 1 at the Grid (Graduate Research Innovation District), an innovation space at the University of Maryland, Baltimore (UMB) that is home to nearly a dozen startup companies.

AlgenAir was joined by five other groups of fellow business-minded students for the Grid Pitch, which is described as a “celebration of ideas and student entrepreneurs,” rather than a Shark Tank-like competition.

There would have been more groups but Jim Kucher, DPA, faculty program manager of the Grid, says rejection is a valuable lesson.

The AlgenAir duo found that out at last year’s Grid Pitch when they debuted an idea to produce algae nutraceuticals using rooftop bioreactors. After consulting with mentors at the Grid, they realized an air purifier was a more viable option and made the switch in August 2018.

“One of the most important things you can learn as an entrepreneur is that ‘no’ is a very good thing,” noted Kucher. “Finding out a project won’t work is extremely valuable.”

Learning such lessons is why the innovation space to access entrepreneurial education and free, high-end business development services was opened in 2017.

“This is truly a space where students, faculty, staff, alumni, and entrepreneurs —  inside and outside the University — can work shoulder to shoulder on the next big thing or the next small thing that can make a big difference,” UMB President Jay A. Perman, MD, said at its unveiling. 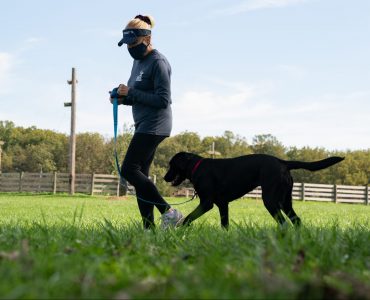 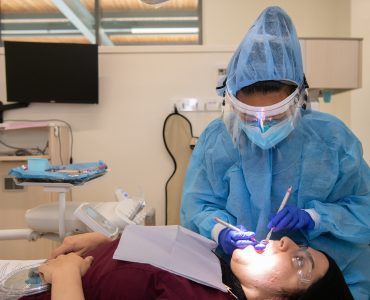 A Reason to Smile: UMSOD Team Works Together on Cutting-Edge Infection Control Textbook